The Good and Bad of Shock Collars for Dogs

There has been a lot of controversy through the years about whether shock collars for dogs should be part of training. 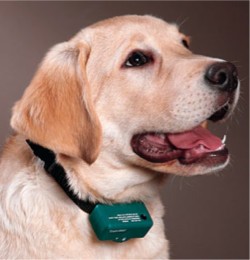 Shock collars can be used for just about anything, and there are variations available depending on what you want to do with them.

Some variations give a small shock when the dog starts to bark, which is meant to help with treating nuisance barking. Others come with a perimeter wire that enable you to create an electric "fence" without putting up a physical barrier. The shock occurs when the dog gets too close to the wire. Some models even come with a remote, which enables you to trigger the shock whenever you want to. A remote is meant to be used for training specific problem behaviors.

In some cases, shock collars do seem to help with nuisance barking, which is essentially barking that occurs for no apparent reason. However, it is also important to note that these collars don't work with every dog. Long-haired dogs and large breeds may be less responsive, either because there is too much hair between the collar and the skin on their neck or because the collar does not produce a large enough shock to elicit a reaction in the larger breed.

Do They Really Use Electricity?

When deciding whether to use a shock collar with your dog, it is critical that you understand how these devices work. Proponents of the devices say the shock is more like static electricity and similar to the shock you receive when shuffling your socks across the floor on a dry day.

And now we get to the debate about whether shock collars for dogs are really humane or if they are rather cruel. One study showed that almost 25 percent of dogs that are trained using shock collars do not experience any stress from the shocks. However, that still leaves 75 percent of dogs that are stressed by the shocks, and some dogs end up with small burns or darkened areas of skin where the two prongs from the collar made contact with skin. Just imagine if you received repeated shocks in exactly the same two points on your body. It would hurt after a while.

When you consider the number of other successful options on the market, we simply can't recommend shock collars as your go-to method of training, especially since studies seem to indicate that with some breeds, shock collars are far less effective than citronella collars

If you do decide to use a shock collar, be careful not to set the shock level too high. If your dog starts yelping loudly after being shocked, you need to turn it down.

Shock collars for dogs should be used only for standard training-not the correction of aggressive behavior. Studies show that using a shock collar with aggressive dogs usually leads to increased aggression.