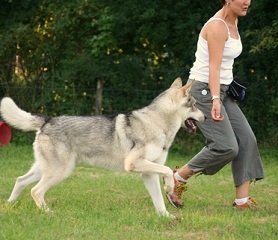 with very little effort. Within the world of dogs, these animal communication gurus are known as dog whisperers.

A dogs whisperer is someone who seems to have an innate ability to communicate with their dog on a deeper level than most people can. This person seems to know what their dog is thinking and can use their ability to train their dog to obey their every command.


Using Dog Whispering in Your Training

There are several ways dog whispering seems to work with animals, although the basic idea is the same. You want to communicate with the dog on his level, which basically involves the use of body language and other communication styles that come naturally to your dog. By bringing your level of communication down to your dog's level, you gain insight into why he does the things he does. In short, you generally find yourself acting more like a dog than a human (although thankfully without spending time on all fours)!

A dog whisperer is basing his actions on the animal's natural pack mentality. It's a bit different than traditional training because you aren't necessarily teaching the dog to follow certain commands and provide desired behavior. Instead you are focusing on becoming the pack leader so that your dog will be obedient to your every command because it's clear that you are in charge. You're also learning how to read your dog's body language and how to use your own body language to communicate in a way your dog understands.

Here are some of the most basic body language
cues that dog whisperers pay attention to:

Tail wagging – Means that the dog wants your attention, whether it's to play or to warn you to back off. Pay attention to other body cues to determine what is meant in each situation. If it's paired with growling, watch out (even in toy breeds, which don't have a very scary growl)!

Tail tucked between the legs – Means that the dog is submitting and/or scared.

Showing teeth – Can be aggressive or friendly, depending on the other body language cues in the dog's body at the moment.

The stare – One way dogs show their aggression is to sit very still and stare. It's sort of like a staring contest, but when you do this with an aggressive dog, you could be putting yourself in danger if you aren't a trained professional.

As a human, you don't have a tail to wag, but dogs will pick up on your other body language cues, so pay attention to what your body is conveying. Even the volume and speed of your breathing provides vital cues that tell your dog how you are feeling.

Can Anyone be a Dog Whisperer?

In short, yes, anyone can be a dog expert whisperer, but it does take many years of training yourself to communicate with dogs before you can become a whisperer. You'll have to learn your dog's body cues and figure out how to use your body to provide the cues your dog needs in order to understand what you want. Probably the most famous dog whisperer is Cesar Millan, whose television show focuses on him working with difficult dogs. The show airs in more than 80 countries all across the globe on National Geographic WILD. His method of training has sparked controversy in recent years, although that is mostly because his training techniques deal with overly aggressive dogs that should only be handled by professionals.

In most cases, you will be using positive reinforcement in order to continue good behavior in your dog. It is a good idea to leave some of the more advanced techniques, specifically those used in dealing with overly aggressive animals, to the professionals.