Dog barking is a real problem that every dog owner must deal with from time to time. Dogs bark. It's a simple reality. 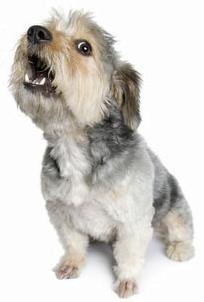 And since the number of dogs alive right now surpasses the number of people in some countries, it's an issue that must be nipped in the bud. So how do you avoid becoming "that annoying neighbor with a dog barking problems?" Here are three simple solutions for you to try.

One of the biggest issues with dog barking problems is separation anxiety. This is one of those problems you probably aren't even aware of because it occurs while you're not home. However, your neighbors might report it to you, and it should be taken seriously. Dogs that bark for about 15 minutes non-stop off and on for an hour or more are usually dealing with separation anxiety. The key to this dog barking problem is to change the way you behave when you arrive home. Don't make a big deal about coming home and don't apologize to your dog for being gone. You're the master; he's the dog. Don't make him feel like the world is coming to an end every time you leave. The way to avoid doing this is to just behave like coming and going is an everyday task, which it is. Don't reward your dog for barking and greeting you wildly at the door when you get in. Wait until he has calmed down and then dole out the reward.

Solution #2:
Desensitize your dog to common sounds or events.

Some dogs, especially toy breeds, seem to bark at the drop of a hat. This barking problems may include time both in the yard and in the house. Start by making a list of all the things that seem to be causing your dog to bark. This may be a very long list! You will probably need to generalize that list. For example, when people come over, it's not necessarily the individual people who visit, but rather the fact that a "stranger" has come to the house. Invite a friend over and work on this dog barking problem by gradually moving your dog closer and closer, rewarding him for not barking. Show him that the desired behavior is silence.

Solution #3:
Don't contribute to the dog barking by "rewarding" him for barking.

Many dog owners have no idea that they are even contributing to the problem. They attempt to comfort their pet when something unexpected happens, and the dog sees that as being rewarded for barking. The best thing you can do in some cases is simply ignore your dog's barking so that he won't be compelled to do it all the time.