Tips and Tricks About Crate Training for Puppies

When you bring a new puppy home, the excitement often levels out to harsh reality fairly quickly when you begin to understand the 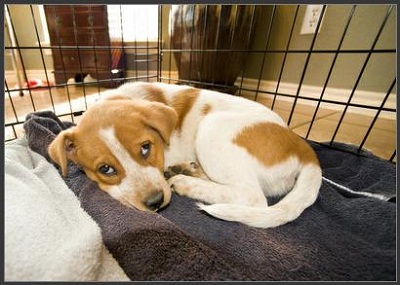 gravity of trying to housebreak a pup. But dog owners who use crate training for puppies experience fewer housebreaking headaches and are able to keep the number of piles and puddles to a minimum.

The History of Housebreaking

How Crate Training for Puppies Works

Crate training for puppies is very simple. The basic idea behind crate training for puppies is the fact that puppies don't want to eliminate in the place where they sleep. You should purchase the crate and have it in place when you first bring your puppy home. The crate should be just large enough for the puppy to lie down in. For large dogs, it may be helpful to purchase a crate that can be divided into a small section while they are small and then enlarged as the puppy grows.

Don't keep puppies younger than six months in a crate for more than four hours at a time because they haven't developed bowel and bladder control for extended periods of time yet. Adult dogs that haven't been trained to "hold it" should be treated the same way until you work your way up to longer periods of time in the crate.

Also remember that dogs need exercise, so only crate him when you can't watch him, like while you're gone or overnight. He needs plenty of time to run around. Take the puppy outside immediately after he eats or plays because he will be more likely to eliminate outside while you're watching and can reward him for doing it in the right place.